The Bird King: an artist's notebook US Edition 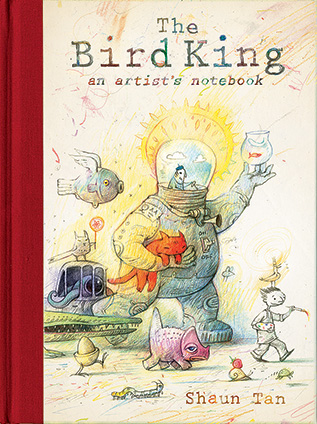 A new edition of The Bird King (from which this blog gets its name) will be released by Arthur A Levine Books / Scholastic on February 1, 2013. For those unfamiliar with the earlier Australian edition, this is a 128 page collection of various drawings, doodles and preliminary sketches: no finished artwork, and each piece created in a single, relatively short sitting without any intention of publication. Presenting such under-the-desk material casts a little light on a working process that's often just as interesting as finished results. I also wanted to remind young artists that even the most unlikely chook-scratchings (casual drawings) can sometimes turn good. You just have to go with it. You can find out more about it at my site; click here for a review from Publishers Weekly
Posted by shauntan at 20:24 8 comments:

This project involves the construction of a large-scale mosaic on the side of a campus building, at once a decorative feature and a working sun dial. Initiated by the University of Western Australia (where I studied Fine Arts and Literature from 1992-95), this project has been  developed in collaboration with Susan Marie, who instigated two other large mural projects at Subiaco Library during 2002-4, and Peter Kovesi, an engineer, research professor and technical whizz at UWA. Peter developed a linear pattern which charts the movement of shadow cast by a gnomon (a small suspended object) over a west-facing wall during the last five hours of each day. I then designed a mural around this fixed element, anticipating that it be reproduced as a high resolution glass-tile mosaic.

My basic idea was to make playful references to the movement of celestial bodies over the coastal plain of Western Australia, something like an imaginary religious icon. Colours and patterns were inspired medieval ‘Book of Hours’ illuminated manuscripts, some of which are notable for their intense gold and lapis lazuli pigments. The shadow cast by the gnomon will radiate from just below the centre of the setting sun, represented here as a winged spirit, keeping an eye on it’s lunar companion as day gives way to night – below are some developmental sketches for this design. The completion of the mural in early 2013 will coincide with UWA’s centenary celebrations.